(Previous analysis as well as outside sources – italics).

Buyers, however, as you can see, reduced speed after shaking hands with the 2018 yearly opening value at 1.2004 late August, enough to force a 1.1621 support retest (clearly interpreted by many as a dip-buying signal).

Sustained upside this week throws the 2018 yearly opening value back into the mix.

The technical position on the daily timeframe also exhibits scope to explore higher terrain this week, with little seen preventing bulls from taking a run at resistance coming in from 1.1940. It is also worth noting this base is sited just under weekly resistance mentioned above at 1.2004.

Although concluding off session highs, GBP/USD still finished the week on a relatively solid footing.

It is also worth pointing out the aforementioned trend line was engulfed in late July this year, announcing an uptrend could be on the cards.

Price action on the daily timeframe hit the brakes a touch ahead of resistance from 1.3200 last week, a level pinned just south of Quasimodo resistance at 1.3267.

Beyond the aforementioned supports, channel support, etched from the low 1.2687, is also seen as a reasonable base this week, together with October’s opening value placed at 1.2925. 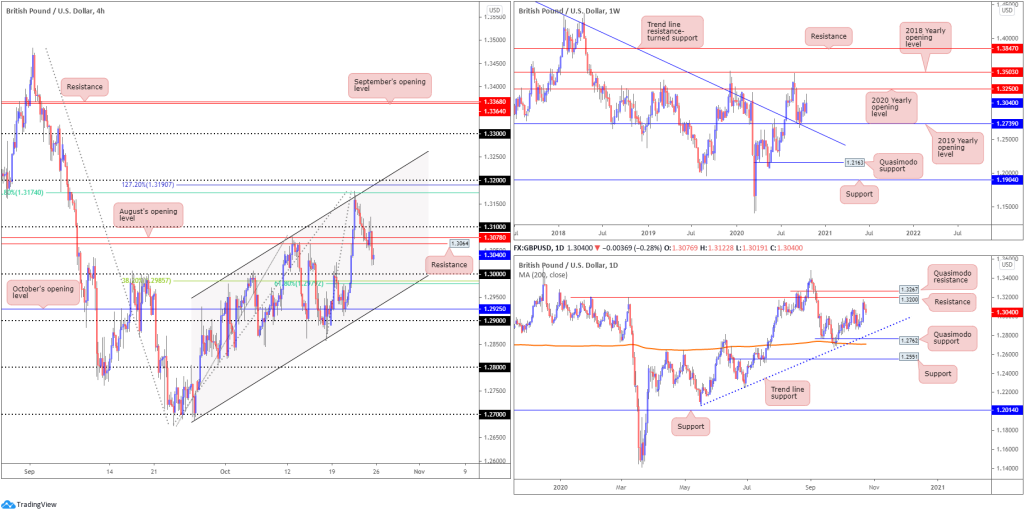 Resistance at 0.7379 lines up as the next upside hurdle should an advance materialise this week. It should also be pointed out that the trend in this market remains to the upside.

Following Tuesday’s hammer candle forming ahead of support priced in at 0.7017, AUD/USD rallied strongly Wednesday with Friday embracing peaks at 0.7158. This potentially sets the technical stage for another bout of buying, eyeing resistance plotted at 0.7235.

The Australian dollar capped off the week in positive territory against a softer buck, recently discovering support ahead of the 0.71 handle.

North, however, we can see Friday faded a 61.8% Fibonacci retracement resistance at 0.7157, plotted just south of October’s opening value at 0.7169 and a trend line resistance, formed from the high 0.7413.

Clearance of 0.7169 this week throws the 0.72 handle into the mix as possible resistance, closely shadowed by a Quasimodo resistance level at 0.7209.

Down more than 60 pips, USD/JPY concluded the week at long-term support from 104.70. Though this may excite buyers, the level has failed to turn the dial in terms of bullish interest since early August, ultimately hindered by supply at 108.16-106.88.

Quasimodo support at 102.55 offers a feasible target beyond current support in the event we turn south this week, while removing the aforementioned supply draws the 2020 yearly opening value at 108.62 into the fight.

Movement on the daily timeframe is visibly compressing between two converging descending lines taken from 104.18/106.94, establishing a falling wedge pattern. Due to the series of lower lows and lower highs since March, the current falling wedge is likely to be interpreted as a reversal signal should a breakout higher take shape.

In addition to the wedge construction, support stands at 104.18 and resistance falls in around 106.06.

Buying from the 161.8% H4 Fibonacci projection point at 104.37 (and 78.6% Fibonacci retracement ratio at 104.45), levelled off in recent dealings, thanks to a correction in the US dollar index off peaks at 93.12. USD/JPY resistance at 104.80, as you can see, proved stubborn, capping upside twice during the second half of the week.

Resistance at 1.3225 pushed its way into the spotlight mid-October and has so far held ground.

Should sellers regain a foothold this week, Quasimodo support at 1.3042 offers a reasonable target. Moves above 1.3225, on the other hand, could lead candle action to resistance at 1.3330.

A stronger-than-anticipated recovery from 1.31 saw price engage supply (green) around 1.3191-1.3168 in early trading Thursday (positioned beneath 1.32), which led to a slow grind lower into the week’s end. We also have two trend line resistances to work with, both pencilled in from the high 1.3420, though the inner line appears delicate.

Digging under 1.31 this week, however, will have traders’ crosshairs shift towards September’s opening value at 1.3043 (according to our charts), closely shadowed by a 127.2% Fibonacci projection point at 1.3036. Price readers will also acknowledge the aforementioned H4 supports converge closely with weekly support at 1.3059 and daily Quasimodo support priced at 1.3042. 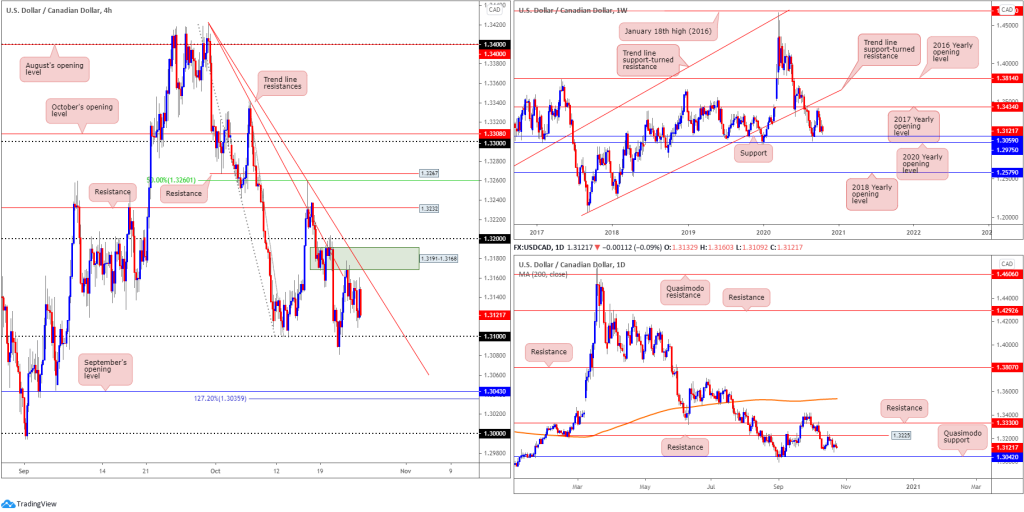 Erasing more than 100 points and closing out the week a shade off session lows, USD/CHF smothered the prior week’s recovery attempt and set price within striking distance of support at 0.9014. For those who read previous analysis on this pair, you will also note current support is bolstered by ABCD support at 0.9051 (black arrows).

Quasimodo support at 0.8692 is in view as the next downside objective should sellers bring down 0.9014 this week.

Closer analysis of price action on the daily timeframe also reveals the pair closing in on weekly support mentioned above at 0.9014, after failing to test resistance priced in at 0.9187.

September’s opening value from 0.9038 echoed solid support mid-week, encouraging moves to resistance at 0.9091 (sited south of 0.91). Unable to penetrate 0.9091, buying pressure subsided into the closing stages of the week, gesturing a possible dip to weekly support featured above at 0.9014. 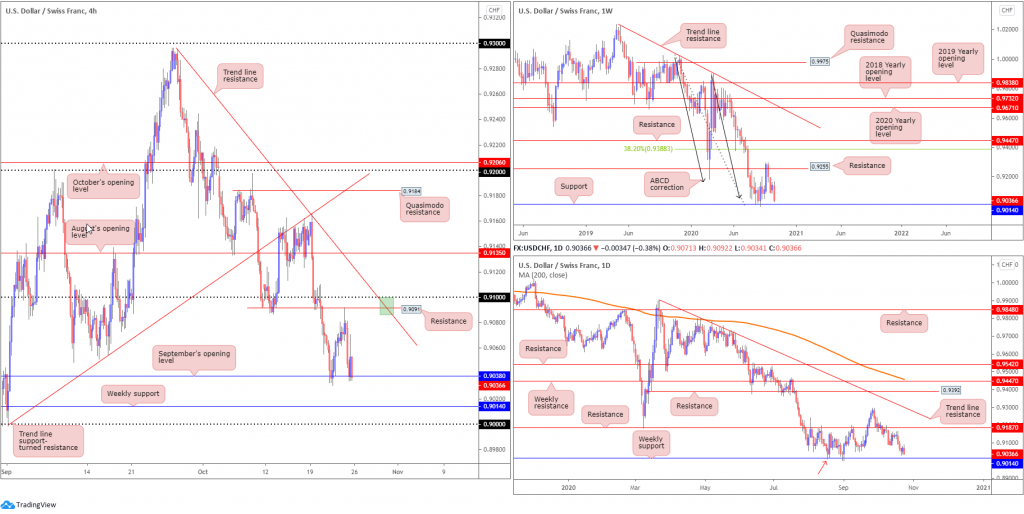 Price, based on the weekly timeframe, demonstrated moderate selling interest around 28595, a 2020 yearly opening value, over the past few weeks. This followed a robust two-week advance ahead of demand (green) at 25916/26523.

A break to higher land this week swings Quasimodo resistance at 29409 into the light as a possible target.

Daily price has, to some extent, emphasised a stationary tone since mid-October, following an earlier reaction off trend line support-turned resistance, extended from the low 22803.

Additional areas of focus on this scale can be found at support drawn from 27640 and the weekly Quasimodo resistance at 29409.

Uncertainty surrounding the next stimulus deal and upcoming election witnessed US equity benchmarks finish lower on the week.

On the technical front, a falling wedge is in the process of forming, taken from 28854/28155 (note we would have preferred the upper limit to have been drawn from 28967 though was not possible – we work with what we’re given). 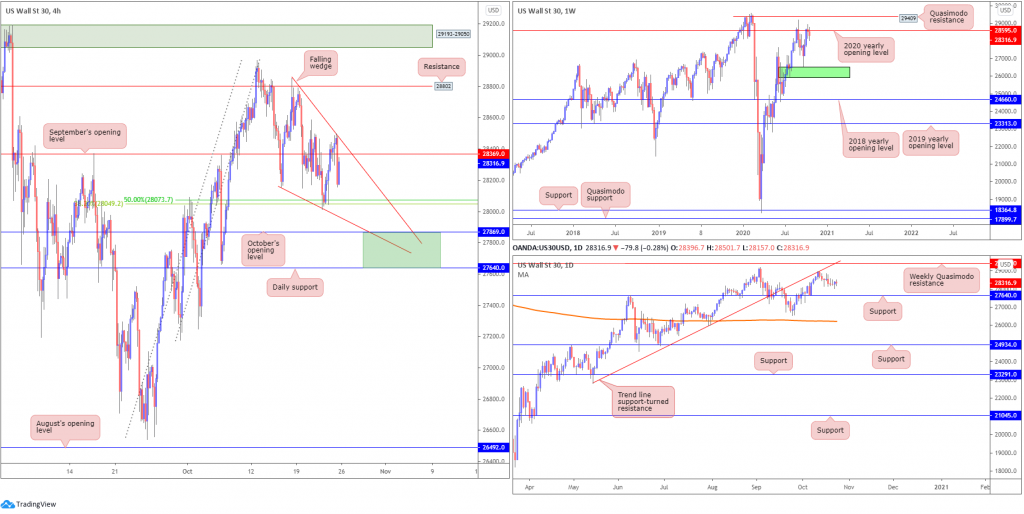 Buyers and sellers continue to battle for position around support at $1,882, fixed a touch above channel resistance-turned support, taken from the high $1,703. Note last week wrapped up off best levels.

While the immediate trend (higher since 2016) favours a bullish scenario here, the lack of buying interest seen from mid-August suggests a dip to the aforementioned channel support. Traders are also urged to pencil in supports at $1,787 and $1,738 in the event buyers fail to make an appearance.

Mid-week observed the daily timeframe challenge a descending resistance line, taken from the high $2,015. We also appear to be creating a falling wedge between $2,015 and $1,862 (the lower boundary also lines up closely with support at $1,841), which may be interpreted as a continuation signal in the event of a breakout north this week.

The technical landscape on the H4 chart shows price failed to challenge near-two-week peaks at $1,933 before tumbling Thursday and overthrowing trend line support, taken from the low $1,848. As you can see, a pullback occurred Friday, presumably to gather fresh sellers from the underside of trend line support (now a serving resistance). 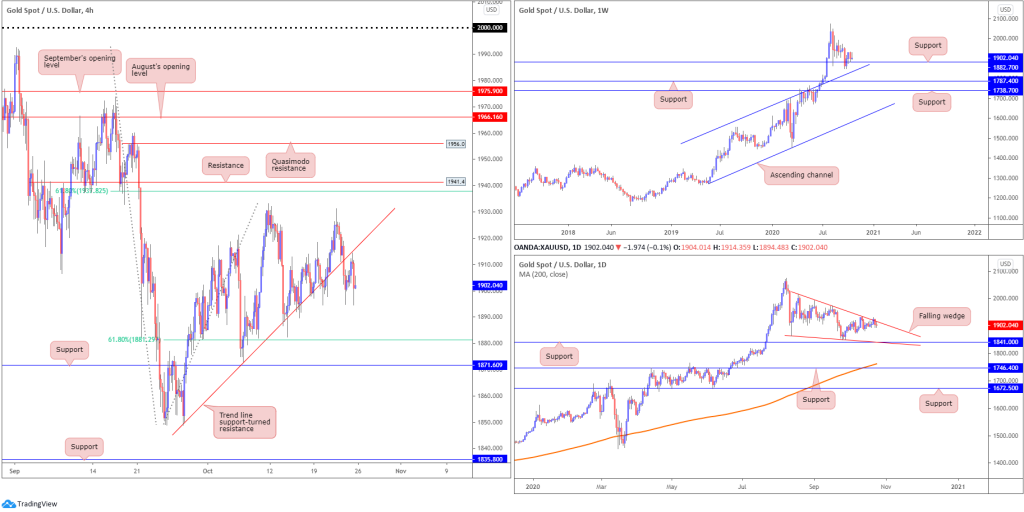 The accuracy, completeness and timeliness of the information contained on this site cannot be guaranteed. IC Markets does not warranty, guarantee or make any representations, or assume any liability regarding financial results based on the use of the information in the site.

News, views, opinions, recommendations and other information obtained from sources outside of www.icmarkets.com.au, used in this site are believed to be reliable, but we cannot guarantee their accuracy or completeness. All such information is subject to change at any time without notice. IC Markets assumes no responsibility for the content of any linked site.

The fact that such links may exist does not indicate approval or endorsement of any material contained on any linked site. IC Markets is not liable for any harm caused by the transmission, through accessing the services or information on this site, of a computer virus, or other computer code or programming device that might be used to access, delete, damage, disable, disrupt or otherwise impede in any manner, the operation of the site or of any user’s software, hardware, data or property.