(Previous analysis as well as outside sources – italics).

Europe’s shared currency concluded lower against the US dollar Thursday, unwinding from the key figure 1.10, a move reaching as far south as May’s opening level coming in at 1.0943 on the H4 timeframe.

On the data front, the Eurozone shows signs of easing as lockdowns lift.

The Eurozone economy remained stuck in its deepest downturn ever recorded in May due to ongoing measures taken to control the coronavirus disease 2019 (COVID-19) outbreak, according to provisional PMI survey data. However, the rate of decline eased as parts of the economy started to emerge from lockdowns.

According to the US Department of Labour:

From a technical perspective, beyond May’s opening level coming in at 1.0943 the 1.09 handle calls for attention as potential support, sited just north of another layer of support from 1.0885 (a prior Quasimodo resistance level). Chart studies also indicate additional resistance above 1.10 plotted by way of April and March’s opening levels at 1.1023 and 1.1045, respectively.

Further afield, weekly price is regaining a footing above the 2016 yearly opening level at 1.0873, with additional buying theoretically setting the stage for a run to the 2020 yearly opening level at 1.1222. A bump lower from here, though, could have multi-year lows enter at 1.0635. It’s also worth reminding ourselves the pair has remained in a long-term downtrend since topping in early 2018.

Meanwhile, daily price crossed swords with resistance at 1.0995 in recent trading, with Thursday attempting to draw in the nearby 200-day SMA (orange – 1.1013). Traders may also want to note between the said resistance and Quasimodo support at 1.0768 has, since early April, witnessed a consolidation form.

Despite H4 price displaying signs of resilience off May’s opening level at 1.0943, daily selling off resistance at 1.0995 could be a problem for buyers. A breakout sub 1.0943, therefore, is possible, targeting 1.09 as the initial port of call.

In the event of a climb, however, we could be looking at a possible scenario involving 1.10, highlighted in Thursday’s technical briefing (italics):

Sterling derived fresh impetus on the back of better-than-anticipated UK PMIs Thursday, containing downside sub 1.22, based on the H4 timeframe. To the upside, chart studies has 1.23 in sight, along with a 38.2% Fibonacci retracement ratio at 1.2293. As highlighted in Thursday’s technical briefing, this Fibonacci level marks the first take-profit target out of the recently completed H4 ABCD completion (black arrows) from 1.2085.

Higher up on the curve, we can see from the weekly timeframe support is positioned at 1.1904, whereas resistance is found at 1.2739, the 2019 yearly opening level, closely intersecting with a 61.8% Fibonacci retracement ratio at 1.2718. Movement on the daily timeframe, however, locates price action at the underside of recently broken daily range lows at around 1.2279.

Having noted daily price tackling the underside of a feasible resistance base (1.2279), buyers off 1.22 could be fragile. This may lead to a break of 1.22 today, underlining breakout strategies in favour of a drop to 1.21. Conservative traders may seek a pullback/retest scenario off 1.22 should we see a break lower, preferably shaped in the form of a H4 bearish candlestick pattern. 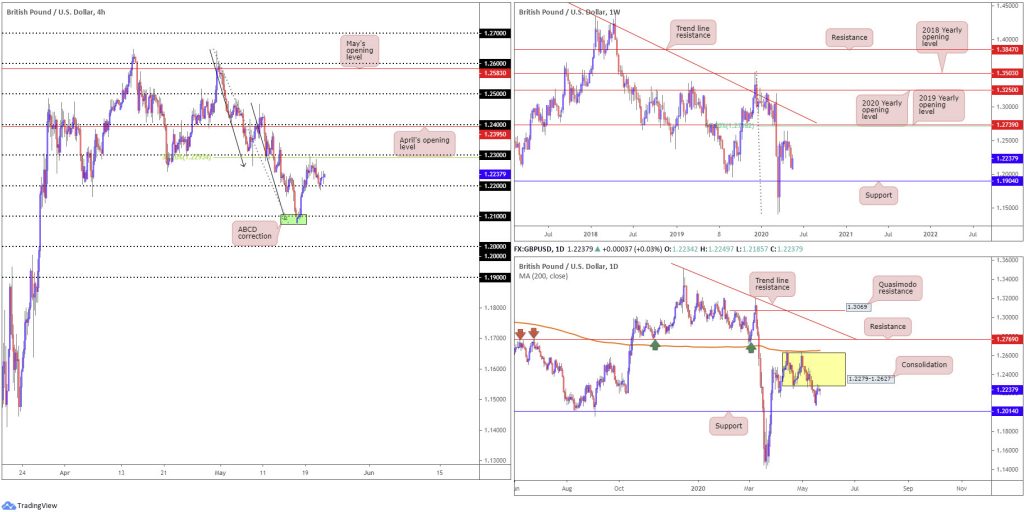 Risk sentiment took a mild hit Thursday amid heightened US/China tensions, consequently strengthening AUD/USD resistance on the H4 timeframe from 0.66 and a closely sited 127.2% Fibonacci extension point at 0.6611. Snapping a three-day bullish phase, H4 candles may welcome 0.65 to the floor today, which, as you can see, comes together with May’s opening level at 0.6494. Rotating higher, nonetheless, could draw in daily Quasimodo resistance plotted at 0.6645.

With price reclaiming all of the prior week’s losses this week, the weekly timeframe suggests scope for further buying, targeting resistance coming in at 0.6677.

A closer reading of price action on the daily timeframe has the unit topping just ahead of a Quasimodo formation mentioned above at 0.6645, parked just ahead of the noted weekly resistance level at 0.6677 and a 200-day SMA (orange – 0.6659).

The following was aired in Thursday’s technical briefing (italics):

Attempting shorts off 0.66 may interest countertrend traders today, particularly as we have a H4 127.2% Fibonacci extension point nearby at 0.6611.

While 0.66 is holding firm, it’s difficult to say whether sellers have enough oomph to carry the currency pair to 0.65, given room seen to nudge higher on the bigger picture. 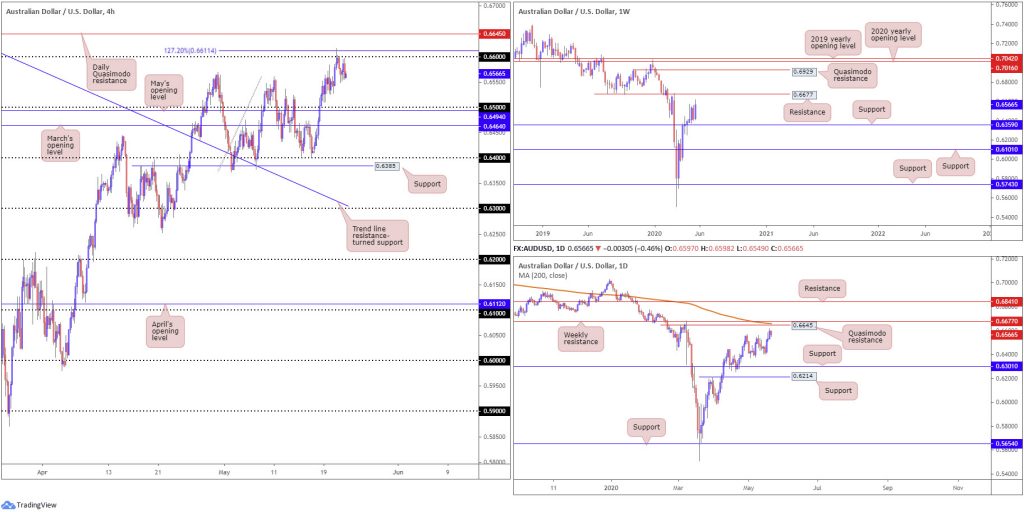 Despite government data showing 2.4 million Americans filed unemployment claims last week and US equities dipped lower across the board on Thursday, USD/JPY concluded the session pretty much unchanged.

Intraday action latched onto a bid off March’s opening level from 107.38 in recent trading, a level converging closely with trend line support, taken from the low 105.98. The move drew the action towards April’s opening level at 107.76, with a break exposing the 1.08 round number as feasible resistance, owing to the number of times the level capped upside since mid-April. Also of interest, above 1.08 we have two ABCD bearish patterns (black/green arrows) merging around 108.60ish, sited just ahead of Quasimodo resistance at 108.70.

On the weekly timeframe, we can see price action hovering beneath the 2020 yearly opening level at 108.62. A rotation to the downside from current price, however, has support at 104.70 to target.

Technical action on the daily timeframe recently shook hands with support at 106.95, after dipping from three-week tops at 107.76. Current movement, as you can see, trades within striking distance of the 200-day SMA (orange – 108.26).

A fakeout through 108 into the 200-day SMA at 108.26 is a potential scenario today, possibly interesting sellers. Buy-stops contained above 108 will likely provide enough fuel to sell. Conservative traders, though, may seek a H4 close back beneath 108 before committing.

The H4 ABCD corrections at 108.60 also marks an interesting reversal zone, an area boasting a close relationship with H4 Quasimodo resistance at 108.70 and weekly resistance at 108.62 (the 2020 yearly opening level). 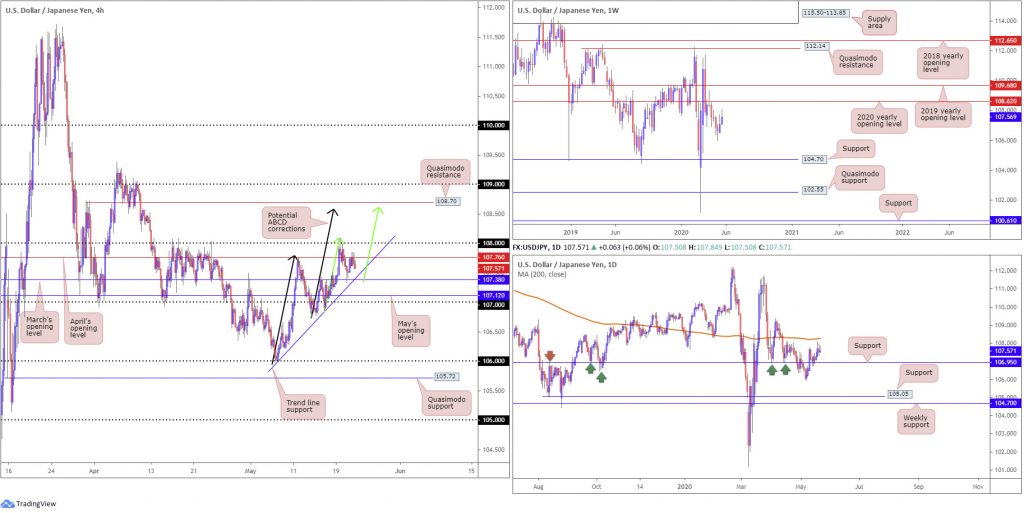 Since Tuesday, buyers and sellers have been battling for position between the 1.39 handle and May’s opening level at 1.3953 (and channel support-turned resistance, taken from the low 1.3850) on the H4 timeframe. Sustained downside below 1.39 shifts focus towards the 1.38 handle and Quasimodo support from 1.3781, while above the said resistances we have the key figure 1.40.

The story on the daily timeframe has seen price action carve out a consolidation between 1.3853-1.4228 since April – current price trades within close proximity of range lows. Areas outside of the base can be found at resistance drawn from 1.4292 and support at 1.3807. In addition, traders will note the 200-day SMA (orange – 1.3442) has been drifting northbound since March.

The daily range is also visible on the weekly timeframe, forming mid-way between a long-standing channel resistance, taken from the high 1.3661, and support at the 2016 yearly opening level from 1.3814. The said base stands in a reasonably healthy position as, overall, we’ve been trending higher since September 2017.

Lower-timeframe traders will likely have eyes on the current H4 range between 1.3953 and the 1.39 handle today. 1.40 is also likely a watched level of resistance.

Above 1.40, nonetheless, may appeal to breakout buyers, with an upside target resting around May’s opening level from 1.4093, followed by 1.41.

If 1.39 gives way, reaching daily range lows at 1.3853 and maybe, with a little oomph, the daily support at 1.3807 and 1.38 handle is possible. Conservative sellers below 1.39 may seek additional bearish candlestick confirmation before taking action. Not only does this help confirm seller intent under 1.39, it provides structure to position entry and risk levels.

Responding to a H4 ABCD correction (green arrows) at 0.9641 and leaving 0.9619/0.9636 (green) unchallenged, an area made up of April, March and February’s opening levels, the US dollar pencilled in a firm recovery against the Swiss franc Thursday amid risk-off trade. H4 price climbed above May’s opening level at 0.9663 and shook hands with 0.97, with the unit currently threatening further upside to trend line resistance, extended from the high 0.9900 and a 61.8% Fibonacci retracement ratio at 0.9728 (note this is traditionally considered a take-profit target out of ABCD scenarios).

Since early April, price action on the daily timeframe has seesawed between 0.9802/0.9597, with current price trading mid-range. Traders may also want to acknowledge the 200-day SMA (orange – 0.9784) circles the upper boundary of the aforesaid range. Outside of the base, traders will note resistance rests at 0.9848 and support from 0.9542.

Intraday traders today, having seen H4 price attempting to conquer 0.97, may make their way towards trend line resistance, taken from the high 0.9900, and 61.8% Fibonacci retracement ratio at 0.9728. These two levels, coupled with weekly resistance seen plotted at 0.9732, will likely be viewed as reasonably strong resistance, healthy enough to withstand upside attempts and perhaps force moves back to 0.97. 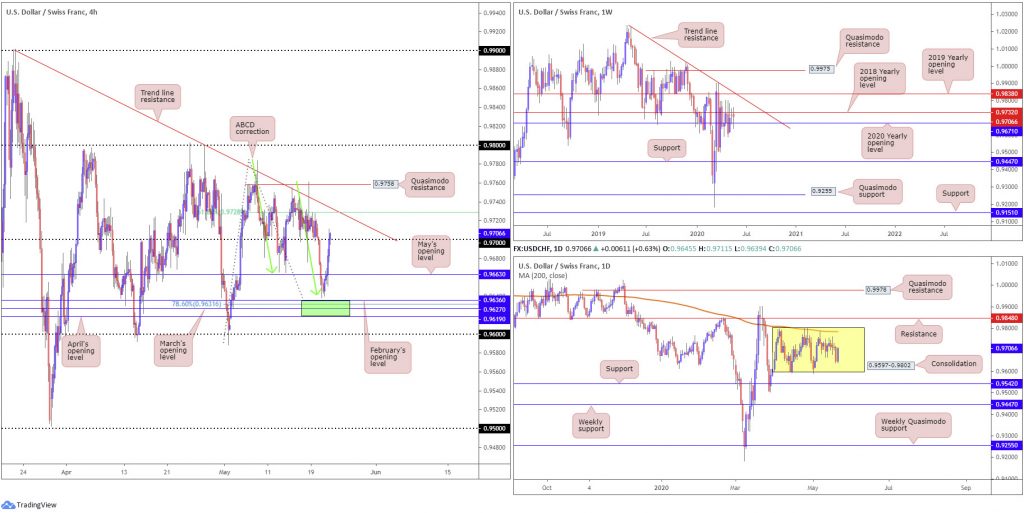 Although dipping into lower territory yesterday, technical structure remains unchanged going into Friday’s session. Therefore, much of Thursday’s outlook will be echoed in the following piece.

A similar picture is present on the daily timeframe, only resistance rests at 24934 and support at 23291. Beyond resistance we have the 200-day SMA (orange – 26348) lurking close by, whereas through support we may find another layer of support emerge at 21045.

Should buyers remain in the driving seat, nevertheless, we could see a move above 24934, rattling breakout buyers. However, do be aware, the weekly 61.8% Fibonacci retracement ratio at 25229 could hamper upside.

Down 1.2% against the greenback, bullion slam dunked into H4 trend line support, taken from the low 1668.0, amid a USD recovery Thursday. The recent descent also formed a D-leg to an AB=CD bullish correction (green arrows) at 1712.8. This, given the trend on gold has faced a northerly trajectory since 2016, will likely grip buyers today.

In conjunction with H4 price forming an AB=CD correction, we can also see daily price retesting the recently broken pennant resistance as support, established from a high of 1747.7. Take-profit targets out of these patterns are measured by taking the preceding move (black arrows) and adding the value to the breakout point. As you can see, this is a sizeable take-profit, coming in at 1909.4.

Testing trend line support, based on the H4 timeframe, in the shape of an AB=CD approach, along with daily price retesting the top edge of a bullish pennant formation, is likely enough to excite buyers, despite weekly price tackling resistance as we’re essentially with the trend here.

Traders long the H4 AB=CD configuration may have protective stop-loss orders set around 1700.8, under a trend line resistance-turned support, taken from the high 1739.1, targeting a H4 close above weekly Quasimodo resistance at 1739.6. 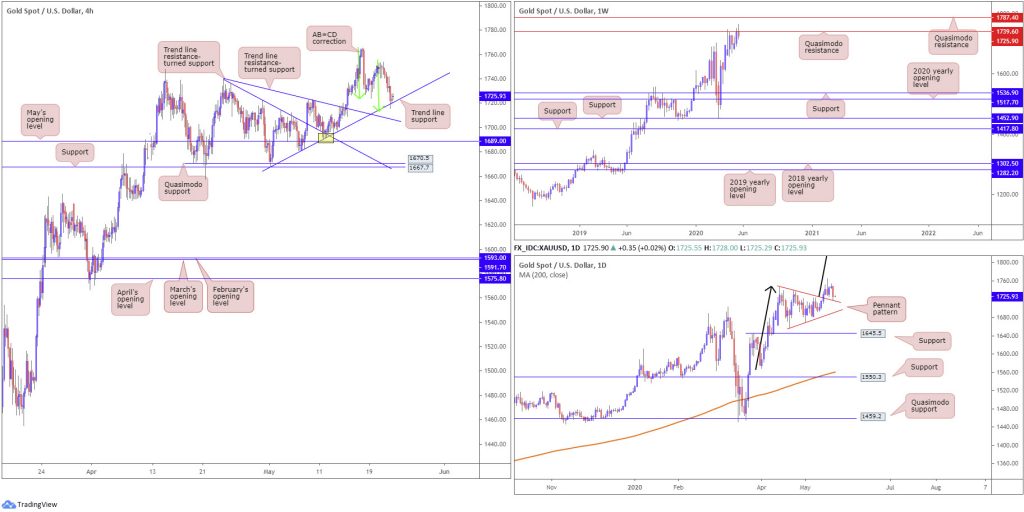 The accuracy, completeness and timeliness of the information contained on this site cannot be guaranteed. IC Markets does not warranty, guarantee or make any representations, or assume any liability regarding financial results based on the use of the information in the site.

News, views, opinions, recommendations and other information obtained from sources outside of www.icmarkets.com.au, used in this site are believed to be reliable, but we cannot guarantee their accuracy or completeness. All such information is subject to change at any time without notice. IC Markets assumes no responsibility for the content of any linked site.

The fact that such links may exist does not indicate approval or endorsement of any material contained on any linked site. IC Markets is not liable for any harm caused by the transmission, through accessing the services or information on this site, of a computer virus, or other computer code or programming device that might be used to access, delete, damage, disable, disrupt or otherwise impede in any manner, the operation of the site or of any user’s software, hardware, data or property.

Alrosa sees May diamond sales at tens of millions of dollars
11:56 GMT+0000